Been a little busy and enjoying the sunny ass weather for as long as it’s out. I live in London   So we’re all taking in that Vitamin D before it gaarn and we end up with the four seasons in one day again.
Sooooo…..I’ve spoken about Make-up tips that might be useful, and then I thought maybe I’ll share what foundations I’ve used in the past and in present that I really like. All foundations will react differently depending on primers, that’s just what it is.

This isn’t in any particular order.

I’ve seen this stick around for a while but I only bought it last year and I can’t complain. In my last blog I spoke about it briefly, I have the stick in a darker shade so when I use it I can just blend it out with my foundation. It’s not overly creamy it’s quite a thick texture when it goes on your skin so you don’t need to much, it’s got good coverage for just putting on the minimal amount. Over a couple hours it holds quite well, but I feel like it holds a certain oil within it that can make your t-zone shine so it might not be the ideal for everyone.

Maybelline Satin liquid:
I started with Maybelline mousse in that little circle jar, when but that was like a mess. I never knew another foundation but that. Then I used the one in squeeze jar, which I liked, it’s not light, it’s a pretty thick foundation so you do get coverage. There’s not many shades within that brand of foundation that’s the thing. I would say it holds but it can feel alittle oily too maybe cause it’s thick, you know those foundations that you know you have on.
I would say drops of it is fine, it’s a nice a affordable foundation with the right primer. 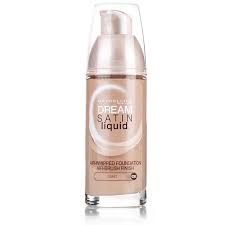 Lancôme Teint idol ultra:
I think I got this foundation a year and a half ago or two and I really was impressed with it. It’s light enough not overly watery to have good coverage. It does last through the day and makes your skin look dewy.  It’s a little expensive but it’s a nice alternative. They have quit a wide spread of shades also so it should be more easier to find a shade that’s closer to your skin tone.

Mac Studio Fix liquid:
I was never a mac fan, I wasn’t a girl who wanted to go to get the mac foundations but I have one foundation of macs, I thought I should at least try it.
I like it, it’s got good coverage, It’s thick enough to not use so much, I do feel sometimes that I have that ‘make-up’ feel on my face but it is what it is.
I probably would say go to the actual mac stands and find someone who can match you. It is expensive though, my pocket kinda hurt.

Ugh, I love this foundation. I was in Southampton with my friend when I got this it was a while back and although the shade I believe was darker than my complexion, the way it glided over my skin was just so nice. Even though the colour wasn’t perfect I liked the richness of it, it had a pretty look.
This was my first expensive foundation stick but I just loved it, the only thing I’d say it ended so quick. I use it to contour instead, you know those ones when you’re trying to scrape the last bits from it.

Well those are my immediate go to foundations and especially this summer with the weather being nice and quite consistent just be careful you wont have a slip and slide on your face, each foundation will react differently under different circumstances so keep an eye out on that.

(I will try my best to be a lot more active, especially with the hair blogs and News blogs as there has been so much going on.)

My name is Khadija I am an actress and I work full time, I started my blog as a small hobby trying to get out my creative juices, writing about my hair and skin care, little commentary on social issues and hopefully start my little nail varnish business some time in the future. I want to be able to progress in the entertainment industry as a serious actress and hopefully be able to write my own scripts. I hope my blog gives you some form of entertainment, whether you’re just passing by or a regular reader, thank you for taking the time to read what’s on my mind in the moment.