Now I’m late, obviously because it took place a couple weeks back. I watched the advert umm…. Well my thoughts are the same as it was a couple weeks ago…why?

I’m pretty sure a lot of people have seen the advert, but I’ll explain briefly.

Miss Kendall Jenner is at a photoshoot, as she gazes upon a protest. A man who is also a part of the protest prompts her to leave her photoshoot, wig and all, makeup smudged and joins them. As she goes through the crowd, she picks up a Pepsi can and heads to the front of the crowd, where police officers are standing in a line. Miss Jenner calmly gives over a can of Pepsi to one of the standing police officers, he drinks it as the crowd cheer on and congratulate each other.

Here’s the thing, yes, it was interesting to see that the crowd was very diverse, I can give them that. This is where it went wrong, it was a practical replica of activist movements to sell a beverage… just a drink…..

When I saw the video I immediately saw the image of a woman named Iesha Evans, a young black woman, protesting in Baton Rouge due to the aftermath of the killings of Alton Sterling and Philando Castile by police officers. The picture is surreal and aesthetically amazing. 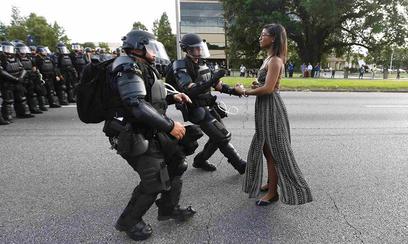 It felt like a slap in the face to those who have ever been involved within specifically the ‘Black Lives Matter’ movement and any other resistance movements that push for a change in society. Even Bernice King, Dr Martin Luther King’s daughter tweeted saying:

“If only daddy would have known about the power of #Pepsi”  A lot of memes were made… and a lot of words were said….

Pepsi did apologize and gave a small statement, all the while apologizing to Kendall for putting her into this situation. However, this is my thing. Who is sitting round these tables having these discussions about these adverts? I’ve been saying this for about three years now, adverts such as these and even in the UK are so odd and out there that sometimes they completely miss what they were selling, it makes me wonder that these big organisations can easily hand over grands, because it’s not peanuts that make an advert and have a creative team that are SO creative that all ideas are jammed packed into one when they do not coherently work.

Secondly, in a sense these people are acting right? Actually not in a sense they are and so is Kendall. In acting we learn that the audience is the most important thing, and yes it is important to be accurate with our information, listen, there’s a lot of things that the actor needs to take under their wing as their responsibility. I’m not saying that she didn’t…but I would think the smart thing is to use your common sense and RESEARCH! Did the director or producer go with you on the plan of the advert? Did they tell you weeks in advance what this advert is about and what it represents? Did you think to yourself instead of having just a cheque and saying ok, did you think about the consequences and reactions that can come from this advert? Ok, it’s easy for me to say consequences and reactions because you will never be able to measure it before you do something, but you pretty much have a thought to what it could be. Instead of just being the face or the model, be proactive and take some form of responsibility. It’s her right to say nothing, boy I probably wouldn’t, but it’s like when Tyra Banks tells the girls to do ‘go see’s’ yeah you remember them if you’ve watched Americas Next Top Model. It’s THEIR responsibility to be there on time and to at least attend each one. It’s THEIR responsibility to research on that cream that they’re putting on their face to sell to YOU , DO NOT let these people walk you around like sheep because they will drain you and make you look like a fool. Stand for something. All they care about is whether their product sells, hey…money makes the world go round huh….